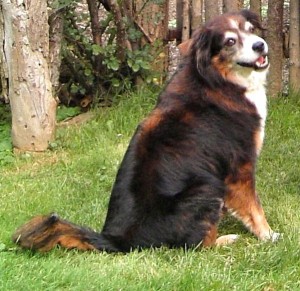 For years, our dog had been making it clear she didn’t approve of us going off on adventures without her. Normally the most cheerful of creatures, Pie became deeply disturbed at the sight of suitcases coming down from the attic. When I started packing, she would get her favorite toy, place it tenderly in the suitcase on top of my things, then stand there with such a pitiful, hopeful expression it was all I could do not to cancel the plane reservations. She felt the family – her pack! – should stay together, and when my husband and I moved from Cleveland, Ohio, to Seville, Spain, we decided she was right.

I was delighted to learn Pie wouldn’t have to go into quarantine, so long as I filled out a stack of paperwork, made sure all her shots were current, and got her a microchip with an identity number. I checked with our vet, government officials, and the chip manufacturer about the type of chip required to transport a dog from the US to Spain, and they all agreed on the one we needed. After it was injected into her shoulder, they give me the chip’s number so I could enter it on the forms. And that’s when I discovered it had the wrong number of digits. When I called the chip manufacturer, he said, “Oh, that chip won’t work overseas. You need a different kind of chip for that. Unfortunately we can’t sell you one of those because they’re illegal in the US.”

Was I annoyed about this? Don’t get me started. Words were exchanged, and I freely admit that some of them may have become a trifle heated on my part. In the end, we drove Pie to Canada (luckily just a daytrip from Cleveland) and had the international chip inserted in her other shoulder.

Next I called various airlines to discuss transport. The woman from Iberia, the Spanish airline, said, “You’re bringing your dog? Can’t you leave it at home?” I tried to explain about being a family, but she wasn’t impressed. “If I were you, I’d make other arrangements,” she said darkly. “It’s not good for dogs to travel by air. They’re cold, they’re frightened, they’re upset, they get sick, they get loose, they get out on the runway, they get killed…” Yikes! I scratched Iberia off my list. 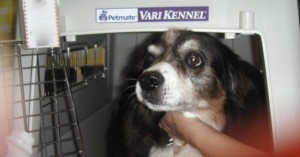 I finally found a major US airline that had a heated cargo area and a reputation for delivering pets to their destination alive. I booked all three of us on flights from Cleveland to Newark to Madrid. With the advance loading time of three hours, Pie would be in her crate for fifteen hours, and you are sternly warned not to give your pet any sleeping medications, food, water, or toys. I was, however, allowed to pay $110 (80€) for someone to take her for a ten-minute walk in Newark.

We scoured all the terminals, then rented a car and started driving from one cargo area to another. Four hours after we landed, yet another bored clerk glanced at my papers and instead of waving me away, he said, “You’ll need to fill out this form…”We saw her crate loaded onto the Newark-Madrid flight, and when we arrived in Madrid, we asked airline representatives where we could collect her. “A dog?” they said blankly. “Here? Really?” They couldn’t even guess where we should go look for her. I was beginning to think I should have listened to the woman from Iberia. Was Pie wandering about the runway? On her way back to Cleveland? Dead?

We’d found her! And after just twenty minutes of bureaucratic delay (which in Spain constituted lightning efficiency) a forklift arrived with her crate.

Pie was on her feet with her nose pressed against the bars and a fierce gleam in her eye. “I have no idea where you’ve brought me,” she seemed to be saying, “But wherever it is, it damn well better be good.”

Karen McCann writes more about moving, traveling, and living abroad in her blog, on her website, and in her book Dancing in the Fountain: How to Enjoy Living Abroad.