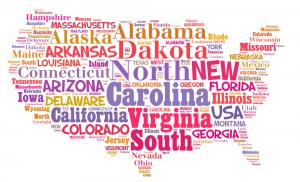 Before the arrival of European colonists in the 17th Century, America was populated by Indigenous groups of people. By the 1770s, there were thirteen British colonies in America containing two and a half million people. By 1776 these colonies had declared independence and became the United States of America.
Other big moments in American history include the assassination of Abraham Lincoln, the purchase of Louisiana, the assassination of John F. Kennedy, the American Revolution, the Civil War, the Manhattan Project, the Vietnam War, September 11 and the death of Osama Bin Laden.

George Washington was apparently the largest distiller of whiskey in the new American nation during the late 1700s. In the year before his death (1798), Washington’s distillery produced 11,000 gallons of whiskey.
Sport